“This is a rip-roaring debut. It is Lemony Snicket meets Pirates of the Caribbean, with a sprinkling of Tom Sawyer for good measure.” 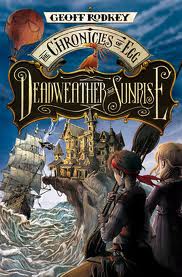 Deadweather and Sunrise was one of the best books of 2012.

It’s tough to be thirteen, especially when somebody’s trying to kill you.

Not that Egg’s life was ever easy, growing up on sweaty, pirate-infested Deadweather Island with no company except an incompetent tutor and a pair of unusually violent siblings who hate his guts.

But when Egg’s father hustles their family off on a mysterious errand to fabulously wealthy Sunrise Island, then disappears with the siblings in a freak accident, Egg finds himself a long-term guest at the mansion of the glamorous Pembroke family and their beautiful, sharp-tongued daughter Millicent. Finally, life seems perfect.

Until someone tries to throw him off a cliff.

Suddenly, Egg’s running for his life in a bewildering world of cutthroat pirates, villainous businessmen, and strange Native legends. The only people who can help him sort out the mystery of why he’s been marked for death are Millicent and a one-handed, possibly deranged cabin boy.

Come along for the ride. You’ll be glad you did.

Deadweather and Sunrise is an action-packed debut novel of adventure, friendship, and self-discovery–oh, and did I mention there are pirates? Thirteen year old Egbert Masterson–Egg–is a book loving, intelligent 13-year-old with a big heart and a nose for hidden treasure. While Egg’s life has a lot of reason for despair, he takes his lumps in stride and discovers that “…not everyone who lives on a pretty street is a good person, and that in even the rottenest places you might find someone you can trust with your life.” With suitably gruesome pirate bits, endearing characters, surprising twists, and a delightful quirkiness, Deadweather and Sunrise has all the makings of a breakout new middle grade series.

This adventure has elements of classic children’s literature, but with a humor and quirk all its own. It stands out for many reasons, but most of all for the voice.  Brilliantly running through the narrative is the voice of Egg, the often beat up youngest child of a citrus fruit farmer on the Island of Deadweather, otherwise inhabited solely by pirates. Rodkey’s tale reminds me of The 21 Balloons and of  Kurt Vonnegut’s Cat’s Cradle . The similarities lie  in that it has an exotic, ridiculous island setting with twinkles of oddity and mischief throughout. The characters are rich, especially the lively and disgusting and ever-surprising pirates. My favorite character is Guts, a scrapping, one armed cabin boy who is supposed to fight Egg to the death but instead becomes his most loyal friend. This is a wonderfully fun adventure that is perfect for readers of Rick Riordan (who recommends it on his blog).

Geoff Rodkey grew up in Freeport, Illinois and began his writing career on his high school newspaper, the oddly named Pretz News. During college, he wrote for both the Harvard Lampoon and the Let’s Go travel guide series. After graduation, he wrote for magazines, a video game, a newspaper, a standup comedian, a syndicated columnist, a government-funded economic think tank, several popular television shows, and hit films Daddy Day Care, RV, and the Disney Channel’s Good Luck Charlie, It’s Christmas. He’s currently at work on Blue Sea Burning, the final book in the Chronicles of Egg adventure-comedy series that began with Deadweather and Sunrise now in paperback and continues with New Lands, to be released in May 2013.

Geoff lives in New York City with his wife and three sons. They have no pets, mostly because the whole experience with the goldfish was just too upsetting.

You can learn more about the book series at www.chroniclesofegg.com.

“This promising new series starts out strong with a story filled to the brim with pirates, treasure, intrigue and swashbuckling suspense.”