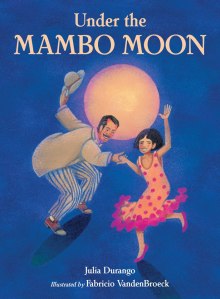 “Samuel”
Samba school is cool, know why?
The students aim to satisfy.
We play our music every night
and practice ’til we get it right.
We sew our costumes, shine our shoes,
build a float, and learn new moves—
all for Rio’s grand parade:
Carnaval, the masquerade!
And on the day of our big test,
we students do our very best
to demonstrate with charm and ease
our samba music expertise.
There’s only ONE important rule—

You gotta have fun in samba school!

Under the Mambo Moon — Julia Durango (Author), Fabricio Vanden Broeck (Illustrator): On summer nights Marisol helps out in Papi’s music store. As customers come and go, they share memories of the Latin music and dance of their various homelands, expressed in a dazzling array of poetry. The diversity of Latin American music is brought to life in poems that swivel, sway, and sizzle with the rhythms of merengue, vallenatos, salsa, and samba. Back matter includes a map, author’s note, and further information about the musical heritage of Latin America.

In understated verse, a girl named Marisol explores the role that music plays in her Latino community, introducing the people who visit her father’s music store (“Papi says you can/ read people’s souls/ by the music/ they listen to”). Grainy grayscale scenes inside the store alternate with kinetic acrylic and colored-pencil tableaus, placed opposite the visitors’ monologues. Mr. and Mrs. Mayer strike a sinuous tango pose (“our legs/ swivel and/ turn like/ an electric/ taffy pull”), while Liliana, with “thin shoulders slumped/ under the weight of a full backpack,” comes alive when salsa dancing with Rubén: “my troubles leave me/ like a flock of twitchy birds/ flying south for the season.” A vivid mingling of poetry, narrative, and art.

Poetry, music, and dance come together with visually stimulating art and an authentic presentation of diversity in Latin American cultures to make this small book stand large. In lines of simple blank verse, young Marisol tells of accompanying her father to his record store and observing the various customers who shop for the dance music they love: “Papi says you can / read people’s souls / by the music / they listen to; / the hearts / fly home / when the music’s / just right.” Marisol’s narrative is illustrated in soft blacks and grays with elements of block print, sketch pencil, and wash that bring the store and its customers stylishly to life. As the dozen or so visitors–including a professor from Andean South America who recalls a zampoña (panpipe) player, a preschool teacher who loves to dance the son jaracho from Mexico’s Veracruz region, and a young man from the neighborhood who chats about the bossa nova and a certain girl from Ipanema–are introduced, they each get a page spread with a poem and a brightly colored pastel portrait that together vibrantly capture the movement and allure of each dance style. Back matter includes pithy descriptions of the different regions and dances evoked in the preceding poems. This lively book will delight independent readers, dancers, and artists and provide a fun and accessible introduction to Latin American history and its lasting heritage of music and dance.

The LBBC’s recommendation for July’s Libro del Mes, is Julia Durango’s Under the Mambo Moon.My familia loves music – especially anything with a Latin rhythm. So I was overjoyed to find the new book, Under the Mambo Moon. Inside the pages of this unique story, readers can explore various types of Latin American music – from Colombia’s cumbia to the Dominican merengue to the candombé of Uruguay.

The story line itself is a little unusual. The first thought that came to my mind was that this book would be perfect for a play. Young Marisol is the narrator. She helps out her Papi at his music store where people come in to buy their favorite songs. Papi says, “You can read people’s souls by the music they listen to.” (Looking at my CD and record collection, I wonder what my soul is saying? I’ve got everything from Sergio Mendes & Brasil ’66 to SpyroGyra to Yiddish-American Klezmer music. Oy.)

Interspersed throughout the book, are brief poems told by each customer who enters the store to buy the music of their homeland. João is a fan of bossa nova, while Professor Soto prefers Andean tunes that he has heard played on a zampoña player. Mr. and Mrs. Mayer are tango dancers, but young Gabriel loves the vallenatos of Colombia.

VandenBroeck cleverly uses color to help the reader distinguish between the main story line and the individual poems for each character. I appreciate the careful attention that he gave to depict each dance accurately with special attention to costumes and musical intruments.

The only thing that would make this book better would be an actual CD to accompany it and provide examples of each musical style. However, Putumayo has some great albums that would complement this book nicely.

I also like how at the back of the book, the author includes a brief history of the amazingly diverse Latin American music and dance. Durango talks about the influence of indigenous, European, and African cultures on the rhythms and even the musical instruments used to create the various styles of music. She also includes a short description of each music style mentioned in the story.

Under the Mambo Moon is written in English with some embedded Spanish text. This book is best suited for children ages 4 and up.

Parents and teachers: This book is an awesome resource if you are studying music, Latin America, culture, traditions, multiculturalism, the colonization of the Americas, etc.

Celebrating the diversity of Latin American music and dance, the poems in this slim yet richly layered collection present a lyrical narrative told from the perspective of Marisol, who has just celebrated her quinceañera and who is helping her father mind his music store. Readers follow the teen as she greets people and describes their specific musical inclinations with poems that vary in style, tone, and format. The illustrations create a contrast between the characters’ “normal” lives and their musical lives. For example, black-and-white pencil drawings introduce the characters through Marisol’s voice in simple prose poems. The individuals are described doing ordinary things: shopping, getting off the bus, skateboarding. These pages are followed by cheerful acrylic color illustrations that accompany poems showing Marisol’s customers writing songs, playing various instruments, and dancing the mambo and cumbia. Each poem displays a sense of community and celebration. An author’s note gives background information about the origins and influences of Latin American music and a glossary offers definitions for the more obscure music and dance terms. A sparkling addition to any library.

At the music store on summer nights people, young and old, come to sing, dance, and play the music of Latin America. Marisol helps her Papi, who owns the store, greet their guests. Fourteen different musical styles, including mambo, merengue, and cumbia, to name a few, are brought to life with free form poetry and colorful acrylic and colored pencil illustrations. As with the music, the visitors’ personalities shine through from shy Gabriel, whose “green eyes always have something to say,” to Susana, “who can’t listen to son Jarocho without dancing.” Five pages at the end explain the diversity of the music and briefly discuss the various styles. This beautiful book is for reading aloud and sharing the charming pictures.

Marisol works at her Papi’s music store. During her shift, she shares a bit of background about the customers from her local Latino community, describing each of them and who they become when inspired by music. The customers, part of a tight neighborhood, are depicted in black and white illustration. The characters come to life in music with full-color acrylics. Durango’s writing styles explores many different poetry forms, including couplets and quatrains among others, with emphasis on Latino musical influences. Includes subtle exposure to a well-rounded relationship with a father and a young girl’s first interest in boys. A delightfully cultural book.

In lines of simple blank verse, a young girl describes spending time in her father’s record store and observing the various customers who shop for the dance music they love. The visitors include a professor from Andean South America who recalls a zampoña (panpipe) player and a preschool teacher who loves to dance the son jaracho from Mexico’s Veracruz region, and each is introduced with a poem and a brightly colored pastel portait that together vibrantly capture the movement and allure of the varied dance styles. A fun and accessible introduction to Latin American history and its lasting hertiage of music and dance.