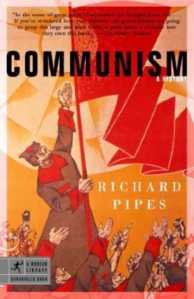 What are some resources for teaching kids about Communism?

How can we help them understand this phenomenon, which is often referenced in newspaper columns, on television and other popular media?

For example,  “May Day, celebrated on May 1, has a storied history that goes back to pre-Christian times celebrating Flora, the Roman goddess of flowers, and later on as the first day of summer, writes Richard Larson in the Idaho State Journal. “It was in essence, an innocuous pantheistic celebration of the old aphorism of ‘April showers bring May flowers,’ celebrated in different ways around the world.”

That tradition changed dramatically however, after the 1886 Haymarket Affair in Chicago. In synoptic terms, what started as a peaceful gathering in support of striking workers on Tuesday May 4, 1886, ended as a violent precursor to leftist destructive demonstrations. As police attempted to disperse the crowd, someone threw a bomb at police. The blast, and subsequent gunfire, resulted in the deaths of seven police officers, four civilians, and numerous injuries. Investigations led to eight anarchists convicted of conspiracy, with seven of those sentenced to death for their involvement.

Consequently, May Day has become an excuse for labor, socialist, communist, and anarchist groups to demonstrate, destroy property, occupy parks, and denounce capitalism, free enterprise, and America’s founding principles. This may seem inconsequential history, but it establishes the core ideological alliance of political elements whose objectives remain inextricably intertwined in contemporary American politics.

One of my favorite books for high schoolers is Communism: A History (Modern Library Chronicles) by Richard Pipes. With astonishing authority and clarity, Pipes has fused a lifetime’s scholarship into a single focused history of Communism, from its hopeful birth as a theory to its miserable death as a practice. At its heart, the book is a history of the Soviet Union, the most comprehensive reorganization of human society ever attempted by a nation-state. This is the story of how the agitation of , two mid-stratenineteenth-century European thinkers and writers, led to a great and terrible world religion that brought down a mighty empire, consumed the world in conflict, and left in its wake a devastation whose full costs can only now be tabulated.

The book is strategically short. Not a word is wasted in its mere 194 pages. Teachers and parents can engage young people with this text because it is very enjoyable and easy to read, yet dense with insight.