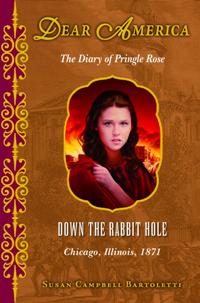 In the spring of 1871, fourteen-year-old Pringle Rose learns that her parents have been killed in a terrible carriage accident. After her uncle Edward and his awful wife, Adeline, move into Pringle’s family home — making life unbearable for her and her younger brother, Gideon — Pringle runs away with Gideon to Chicago, seeking refuge from the tragedy, and hoping to start a new life. She becomes a nanny for the children of a labor activist, and quickly finds herself caught up in a web of intrigue and lies. This is just part of the adventure of Dear America: Down the Rabbit Hole by Susan Campbell Bartoletti. Then, when a familiar figure from home arrives, Pringle begins to piece together the devastating mystery of what happened to her parents, and realizes just how deadly the truth might be. But soon, one of the greatest disasters this country has ever known — the Great Fire of Chicago — flares up, and Pringle is on the run for her life.

“The many apt allusions to Alice in Wonderland, Pringle’s cherished gift from her mother, elevate and deepen the story as, more than once, Pringle’s life is turned upside down, and things are often not what they seem to be,” according to Kirkus Reviews.

Bartoletti’s writing is always clear and at times elegant. She creates a very likable young protagonist and paints this endearing character against a well-drawn historical backdrop. Her entry in the Dear America series brilliantly weaves the high-action historical diary tale into the whirlwind of events surrounding the Chicago Fire of 1871.  The book also includes the general labor unrest that was taking place at the time.  This wonderful and captivating story is a great choice for teens as well as adults.

As the pages turn, it feels like you’re reliving history.

You see, the acts of researching and writing and telling stories help me to stretch and to grow and to make meaning. It helps me understand difficult subjects and ideas.

If you know my body of nonfiction work, then you know that I’ve spent the last twenty years researching and writing and thinking deeply about difficult and heart-breaking subjects such as child labor, the Holocaust, the Third Reich, famine and war, and the Ku Klux Klan.

In my work, I explore the lives of those who were victimized, exploited, disenfranchised, and silenced. I like to explore the ways that these people’s lives were greater than the pain and violence and injustice that they suffered. I like to explore the ways these people became active agents in their struggle for change — and for survival and for the survival of their loved ones. Those who suffered violence and injustice and hatred were not passive victims.

Given my interests, it may seem obvious that I would tell Pringle’s story through one of those lenses. After all, that’s what I did in my first Dear America book, A Coal Miner’s Bride.

I like to expose gaps and contradictions. I appreciate irony. Perhaps that’s the best way to explain how Pringle showed up on the page, as the daughter of a wealthy mine owner who railed against the workers’ attempts to unionize and strike for better wages and living conditions.

A book always surprises its writer, and there were many other surprises along the way. For example, when I began writing, I didn’t realize the full extent of my interest in the lives of children with disabilities and the fact that their stories are often marginalized or missing completely from the historical record. I didn’t know that Pringle’s younger brother Gideon had Down syndrome. That storyline emerged as I began to explore Gideon’s character more.

And yet, I know where I found the inspiration for Gideon’s character: from a family friend named Sal Angello. Sal was born with Down syndrome in 1947.

I first met Sal when I was sixteen and grew to know him and his family well over the coming years. Little did I know that I was collecting seeds for a character named Gideon. Perhaps the best compliment comes from Sal’s amazing sister, Rose Marie Crotti, who says about the book: “Susan captured Sal’s sense of humor and life qualities that were unique to him.”

Sal’s family was not wealthy, as Gideon’s family is in the story, but Sal led a rich life. He died before his sixty-third birthday in 2010.

Bartoletti’s lively prose and strong characterizations kept me turning the pages. And I absolutely loved sharing the brave  heroine with my daughters. As School Library Journal said: “Whether readers recognize the date of the Great Fire or not, the foreboding sense of tragedy looms over the city, creating suspense in the center of Pringle’s conflicting emotions.” Packed with multiple historical events and an engaging personal story, readers are in for a special treat with Down The Rabbit Hole.