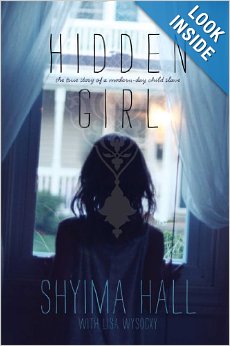 Hidden Girl: The True Story of a Modern-Day Child Slave is an inspiring and compelling memoir from a young woman who lost her childhood to slavery—and built a new life grounded in determination and justice.

Shyima Hall was born in Egypt on September 29, 1989, the seventh child of desperately poor parents. When she was eight, her parents sold her into slavery. Shyima then moved two hours away to Egypt’s capitol city of Cairo to live with a wealthy family and serve them eighteen hours a day, seven days a week. When she was ten, her captors moved to Orange County, California, and smuggled Shyima with them. Two years later, an anonymous call from a neighbor brought about the end of Shyima’s servitude—but her journey to true freedom was far from over.

A volunteer at her local police department since she was a teenager, Shyima is passionate about helping to rescue others who are in bondage. Now a US citizen, she regularly speaks out about human trafficking and intends to one day become an immigration officer. In Hidden Girl, Shyima candidly reveals how she overcame her harrowing circumstances and brings vital awareness to a timely and relevant topic.

This harrowing tale, published in conjunction with National Slavery and Human Trafficking Prevention Month, is the true story of an Egyptian girl who was sold by her parents into domestic slavery at age 8, brought illegally to the U.S. at 10 and rescued by Child Protective Services in Orange County, Calif., acting on an anonymous tip, at age 12,” reads a review in the Buffalo News.

Hall’s straightforward narrative puts in sharp focus the monsters of her horror story: the parents who sold her, and the captors who forced her to slave 18 hours a day, called her “stupid girl” and refused her proper food, clothing, medical care, schooling. Shyima was born in 1989, the seventh of 11 children of a very poor family. Her parents sold her to a wealthy family supposedly to pay off a debt incurred by an older sister. When Shiyma was 10, the family moved to the U.S. to an exclusive gated community in Irvine, Calif., where she lived in a windowless room over the garage, slaved late into the night and washed her clothes in a bucket outdoors. Her life after rescue was not easy, as she navigated a series of foster homes, struggled to learn to read, ended up in a middle school where she was bullied by gang members and suffered through constant pain which was eventually diagnosed as rheumatoid arthritis. Her battle for justice is inspiring, as she pursued prosecution of her captors, obtained citizenship and began the steps toward what she hopes will be a career in criminal justice to help other victims of human trafficking.