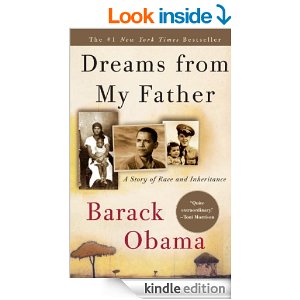 Following his bid to win the U.S. presidency, most Americans believed they knew Mitt Romney. With unprecedented access, the documentary we will watch in class today tracks Romney from 2006 and his first effort to win the Republican nomination, through the 2012 elections, revealing the man behind the sound bites in an authentic view the public rarely glimpsed during the media frenzy of a national campaign.

We will also watch a lyrical, unsentimental, and compelling memoir, Dreams from My Father: A Story of Race and Inheritance. The son of a black African father and a white American mother searches for a workable meaning to his life as a black American. It begins in New York, where Barack Obama learns that his father—a figure he knows more as a myth than as a man—has been killed in a car accident. This sudden death inspires an emotional odyssey—first to a small town in Kansas, from which he retraces the migration of his mother’s family to Hawaii, and then to Kenya, where he meets the African side of his family, confronts the bitter truth of his father’s life, and at last reconciles his divided inheritance.

Willard Mitt Romney (born March 12, 1947) is an American businessman who was the Republican Party’s nominee for President of the United States in the 2012 election. Before his presidential bid, he served as the 70th Governor of Massachusetts from 2003 to 2007.

Raised in Bloomfield Hills, Michigan, by his parents George and Lenore Romney, Mitt Romney spent two and a half years in France as a Mormon missionary starting in 1966. In 1969 he married Ann Davies, with whom he has had five sons. By 1971, Romney had participated in the political campaigns of both of his parents. In that year, he earned a Bachelor of Arts at Brigham Young and in 1975, a joint Juris Doctor and Master of Business Administration at Harvard. Romney then entered the management consulting industry and in 1977 secured a position at Bain & Company. Later serving as its chief executive officer, he helped lead the company out of financial crisis. In 1984, he cofounded and led the spin-off company Bain Capital, a highly profitable private equity investment firm that became one of the largest of its kind in the nation. Active in The Church of Jesus Christ of Latter-day Saints, Romney served during his business career as the bishop of his ward (head of his local congregation) and then stake president in his home area near Boston. After stepping down from Bain Capital and his local leadership role in the church, he ran as the Republican candidate in the 1994 Massachusetts election for U.S. Senate. Upon losing to longtime incumbent Ted Kennedy, he resumed his position at Bain Capital. Years later, a successful stint as president and CEO of the Salt Lake Organizing Committee for the 2002 Winter Olympics led to a relaunch of his political career.

Elected Governor of Massachusetts in 2002, Romney helped develop and enact into law the Massachusetts health care reform legislation, the first of its kind in the nation, which provided near-universal health insurance access through state-level subsidies and individual mandates to purchase insurance. He also presided over the elimination of a projected $1.2–1.5 billion deficit through a combination of spending cuts, increased fees, and the closure of corporate tax loopholes. Romney did not seek re-election in 2006, instead focusing on his campaign for the Republican nomination in the 2008 U.S. presidential election. He won several primaries and caucuses but lost to the eventual nominee, Senator John McCain. His considerable net worth, estimated in 2012 at $190–250 million, helped finance his political campaigns prior to 2012.

Below is a review of Believe in America: Mitt Romney’s Plan for Jobs and Economic Growth

Mitt Romney has referred to this book as the definitive expression of his economic plan in the Republican candidate debates, so I decided to do some due diligence by reading it.

There are 59 recommendations in all, most of which would involve reversing policies of the current Administration. The basic thrust is to slow the big government express and cut the private sector a little slack. Some highlights follow:

Most of these ideas seem sensible to me, but the difficulties involved are understated in many cases and there is little discussion of how to overcome predictable objections. For example:

#Repealing Obama would take more than an executive order that support should be given to states that wanted to opt out, including offering an alternative program (none is satisfactorily described in the book) that would work better.

#It is said the first step towards “getting the federal debt under control” will be “admitting we have a problem and refusing to allow any more irresponsible borrowing.” In, other words, “just say no.” Fine, but how would President Romney propose to get the members of Congress on board?

No president could hope to implement more than a fraction of such an agenda, so it might have been better to focus on what Romney regards as the four or five top issues and go into more detail.

The absence of an identified author results in off putting statements like “Mitt Romney says” this and “Mitt Romney proposes” that, which detract from the book’s impact.,,An account attributed to Romney would have worked better, even if most readers suspected it was ghost written.

In sum, “Believe in America” marks Romney as a competent manager versus an inspirational leader. Probably that is who he is, but it is not necessarily a recipe for electoral success.

President Obama was born in Honolulu, Hawaii on August 4th, 1961, to a father from Kenya and a mother from Kansas. Growing up, he was also raised by his grandfather, who served in Patton’s army, and his grandmother, who worked her way up from the secretarial pool to become vice president at a local bank.

After working his way through school with the help of scholarship money and student loans, President Obama moved to Chicago, where he worked as an organizer to help rebuild communities devastated by the closure of local steel plants.

He went on to Harvard Law School, where he was elected the first African-American president of the Harvard Law Review. After graduating, President Obama went on to lead one of the most successful voter registration drives in state history, and continued his legal work as a civil rights lawyer and a professor teaching constitutional law at the University of Chicago.

Barack Obama was first elected to the Illinois State Senate in 1996. During his time in Springfield, he passed the first major ethics reform in 25 years, cut taxes for working families, and expanded health care for children and their parents. Elected to the U.S. Senate in 2004, he reached across the aisle to pass the farthest-reaching lobbyist reform in a generation, lock up the world’s most dangerous weapons, and bring transparency to government by tracking federal spending online.

Barack Obama was sworn in as president on January 20th, 2009. He took office in the middle of the worst economic crisis since the Great Depression, at a time when our economy was losing 800,000 jobs a month. He acted immediately to get our economy back on track. Today, the private sector has added back more than 5 million jobs. There’s more work to do, but we’re on the right track.

In his first term, the President passed the landmark Affordable Care Act, helping to put quality health care within reach for more Americans. He ended the war in Iraq and is working to responsibly end the war in Afghanistan, passed historic Wall Street reform to make sure taxpayers never again have to bail out big banks, and cut taxes for every American worker—putting $3,600 back in the pockets of the typical family. He’s fought for equal rights and a woman’s right to make her own health decisions. And he’s made a college education more affordable for millions of students and their families.

The President believes an economy that’s built to last starts with a strong and growing middle class—that’s why he has a plan to create jobs and restore economic security to working families. He’s been driven by the basic values that make our country great: America prospers when we’re all in it together, when hard work pays off and responsibility is rewarded, and when everyone—from Main Street to Wall Street—does their fair share and plays by the same rules.