This compelling novel, written for a general audience, is ideal for young adults. 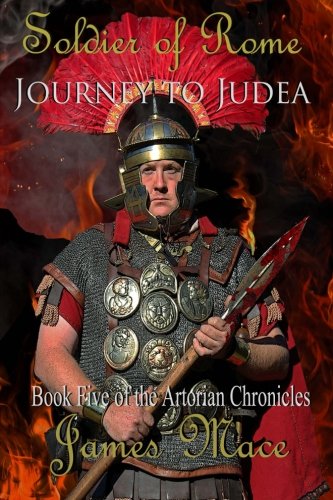 Soldier of Rome: Journey to Judea: Book Five of the Artorian Chronicles (Volume 5)

The year is 31 A.D. It is five years into the Judean governorship of Pontius Pilate and the province ever stands on the edge of a knife. The Jewish religious leaders, the Sanhedrin, use their patronage with the Emperor to vent the slightest grievance, and the people themselves burn with a hatred for Rome. Pilate’s only military forces are Samaritan auxiliaries, little more than an undisciplined mob that abuse and torment the populace. The Emperor Tiberius finally relents and assigns to Judea a single cohort of legionaries to restore order. Pilate tasks his old friend, Centurion Artorius, to command the First Italic Cohort. Though sad to leave the Rhine and the Twentieth Legion after sixteen years, Artorius relishes the chance for adventure in the East. With him will be some old friends, Magnus, Praxus, Valens, and Justus Longinus. In the scorching desert they will encounter bandits, a mad king, his evil seductress stepdaughter, numerous messianic prophets, and unreliable allies, all underscored by the beginnings of a zealot rebellion.

Born in Edmonds, Washington, author James Mace is currently a resident of Meridian, Idaho. He enlisted in the United States Air Force out of high school; three years later transferring over to the U.S. Army. After a career as a Soldier that included deploying to Iraq, in 2011 he left his full-time position with the Army National Guard to devote himself to writing. His well received series, “Soldier of Rome – The Artorian Chronicles,” is a perennial best-seller in ancient history on Amazon. In his latest endeavors, he also branched into writing about the Napoleonic Wars. After he finishes the last of The Artorian Chronicles in 2013, he looks to expand into a series about the Anglo-Zulu War of 1879.

Days passed, and boredom was once again becoming the most arduous enemy for the legionaries aboard the ship. At one point the sailing master had pointed off to the north, noting that they were passing south of the Isle of Rhodes, where many years before Tiberius had been sent after a bitter quarrel with the Emperor Augustus. But as the island was far in the distance, all anyone could actually see were the endless waters. It baffled the legionaries that the sailors could even know exactly where they were. The tedious task of manning the oars, even if for just a couple hours per day, proved more monotonous than when they were lounging on the upper deck. The dull tedium soon turned to heightened awareness early in the afternoon of the third day as a sailor high up on the mast called down a dire warning.

“Ship approaching, sir!” he shouted. “They’re heading straight for us!”

“A relief, perhaps?” Stoppello asked. “Someone from Caesarea may be searching for us.”

“I don’t think so, sir,” the sailor replied; his face full of alarm. “She looks to be armed, but that’s no Roman Navy vessel.”