Welcome back from break!

NOTES: As I mentioned, I curved the last quiz. I did this by adding five points to everyone’s grade. Thus, if you received a 30, I entered 35 points in ThinkWave, our site where your grades for the class are found. See: https://www.thinkwave.com/ … if you got 29 points, I entered 34, and so on. 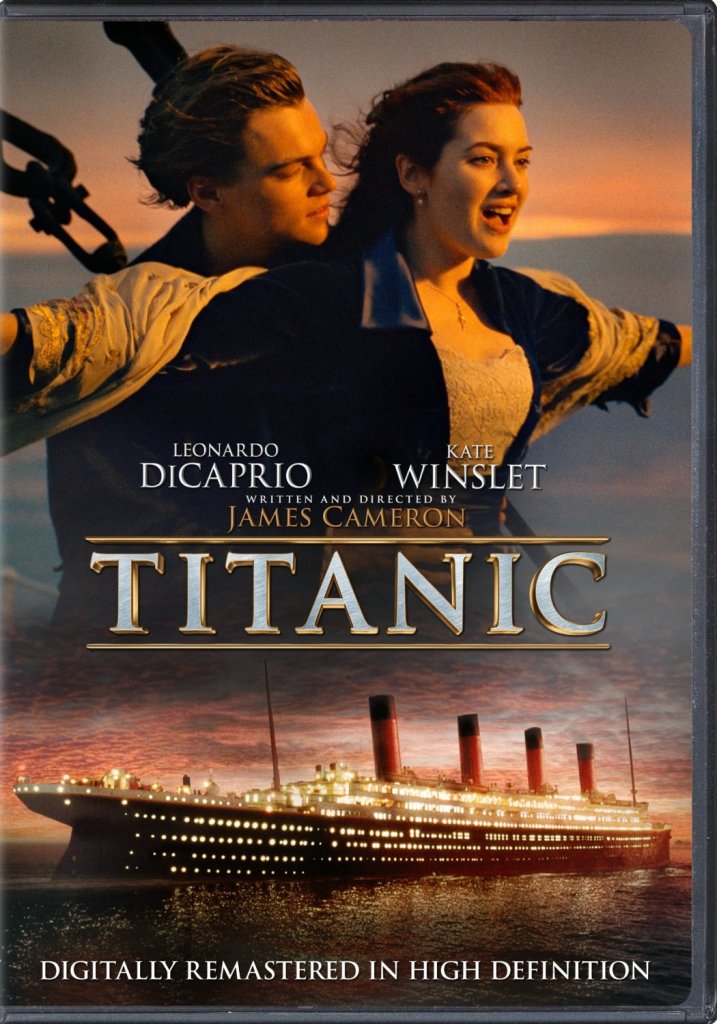 Today, we will watch another classic film, Titanic. As usual, pay attention to plot, characters, and literary devices. We will also examine and learn about a new literary term: motifs.

First, let’s take a look oat our sample piece of great literature. According to an amazon review:

When the theatrical release of James Cameron’s Titanic was delayed from July to December of 1997, media pundits speculated that Cameron’s $200-million disaster epic would cause the director’s downfall, signal the end of the blockbuster era, and sink Paramount Pictures as quickly as the ill-fated luxury liner had sunk on that fateful night of April 14, 1912. Titanic would surpass the $1-billion mark in global box-office receipts, win 11 Academy Awards including Best Picture and Director, launch the best-selling movie soundtrack of all time, and make a global superstar of Leonardo DiCaprio. A bona fide pop-cultural phenomenon, the film has all the ingredients of a blockbuster (romance, passion, luxury, grand scale, a snidely villain, and an epic, life-threatening crisis), but Cameron’s alchemy of these ingredients proved more popular than anyone could have predicted. His stroke of genius was to combine absolute authenticity with a pair of fictional lovers whose tragic fate would draw viewers into the heart-wrenching reality of the Titanic disaster. As starving artist Jack Dawson and soon-to-be-married socialite Rose DeWitt Bukater, DiCaprio and Kate Winslet won the hearts of viewers around the world, and their brief, but never forgotten, love affair provides the humanity that Cameron needed to turn Titanic into a moving emotional experience. Although some of the computer-generated visual effects look artificial, others–such as the climactic splitting of the ship’s sinking hull–are state-of-the-art marvels of cinematic ingenuity. It’s an event film and a monument to Cameron’s risk-taking audacity, blending the tragic irony of the Titanic disaster with just enough narrative invention to give the historical event its fullest and most timeless dramatic impact. –Jeff Shannon

In 1996, treasure hunter Brock Lovett and his team are searching the wreck of RMS Titanic for a necklace with a rare diamond, the Heart of the Ocean. They recover a safe and find inside a drawing of a nude woman wearing only the necklace. The drawing is dated April 14, 1912, the day the Titanic hit the iceberg. An elderly woman calling herself Rose Dawson Calvert and claiming to be the person in the drawing visits Lovett aboard the research vessel Keldysh and tells of her experiences as a passenger on the Titanic.

It is 1912 in Southampton, and 17-year-old first-class passenger Rose DeWitt Bukater, her fiancé Caledon “Cal” Hockley, and her mother Ruth DeWitt Bukater are boarding the Titanic. Ruth emphasizes the importance of Rose’s engagement; the marriage will resolve the DeWitt Bukaters’ secret financial problems. Made distraught by the engagement, Rose considers committing suicide by jumping off the ship’s stern; Jack Dawson, a penniless artist, intervenes and convinces her not to jump. Discovered with Jack, Rose tells Cal she was looking over the edge and Jack saved her from falling. Cal is at first indifferent to Jack’s actions, but when Rose indicates that some recognition is due, Cal offers Jack a small amount of money. After Rose mocks Cal by asking if saving her life meant so little, he invites Jack to dine with them in first class the following night. Jack and Rose develop a tentative friendship, even though Cal and Ruth are wary of the young third-class passenger. Following the dinner, Rose secretly joins Jack at a party in third-class.

Cal and Ruth both disapprove of Rose seeing Jack, so Rose attempts to rebuff Jack’s continuing advances. However, she soon realizes that she prefers him to Cal, and goes to meet him during what turns out to be the Titanic’s last moments of daylight ever. They go to Rose’s stateroom, where she asks Jack to sketch her nude wearing only the Heart of the Ocean necklace, which was Cal’s engagement present to her. Afterward, they evade Cal’s bodyguard and make love in an automobile in the ship’s cargo hold. Later, the pair go to the ship’s forward deck, witness a collision with an iceberg, then overhear the ship’s officers and designer discussing its seriousness. Rose and Jack decide to warn her mother and Cal.

Cal discovers Jack’s sketch of Rose and a mocking note from Rose are in Cal’s safe along with the necklace. Furious, he arranges for his bodyguard to slip the necklace into Jack’s coat pocket. Accused of stealing it, Jack is arrested, taken to the Master-at-arms’ office, and handcuffed to a pipe. Cal puts the necklace in his own coat pocket. Rose evades both Cal and her mother, who has managed to board a lifeboat, then frees Jack. The crew starts to launch flares to attempt to obtain help from nearby ships.

Once Jack and Rose reach the top deck, Cal and Jack encourage Rose to board a lifeboat; Cal claims that he has arranged for himself and Jack to get off safely. After she boards, Cal tells Jack the arrangement is only for himself. As Rose’s boat lowers away, she realizes she cannot leave Jack and jumps back on board the Titanic to reunite with him. Infuriated, Cal takes a pistol and chases them into the flooding first-class dining saloon. After using up all his ammunition, Cal realizes, to his chagrin, that he gave his coat and the diamond to Rose. With the situation now extreme, he returns topside and boards a lifeboat by carrying a lost child in his arms.

Jack and Rose return to the top deck. All lifeboats have now departed and passengers are falling to their death as the stern rises out of the water. The ship breaks in half, and the stern rises 90 degrees into the air. As it sinks, Jack and Rose ride the stern into the ocean. Jack helps Rose onto a wooden panel only buoyant enough to support one person. Holding the edge of the panel, he assures her she will die an old woman, warm in her bed. Jack dies from hypothermia. Fifth Officer Harold Lowe has commandeered a lifeboat to search for survivors. Rose gets Lowe’s attention and is saved.

Rose and the other survivors are taken by the RMS Carpathia to New York, where Rose gives her name as Rose Dawson in memory of Jack. She hides from Cal on Carpathia’s deck as he searches for her. She learns later that he committed suicide after losing everything in the Wall Street Crash of 1929.

Back in the present, her story complete, Rose goes alone to the stern of Lovett’s salvage vessel, takes out the Heart of the Ocean, which has been in her possession all along, and drops it into the sea over the wreck site. When she is seemingly asleep in her bed, the photos on her dresser visually chronicle that she lived a life of freedom and adventure thanks to Jack. A young Rose is then seen reuniting with Jack at the Grand Staircase of the RMS Titanic, congratulated by those who actually perished on the ship.

From a creative writing perspective. Theme, characterization, motifs, mood, and plot are concepts that apply to film as well as other forms  literature.

• Filmmakers purposely create a desired effect. Film elements (angles, shots, sound, lighting, and transitions) are used to influence the audience’s perception and understanding.
Identifying specific elements of film can help us to be critical viewers.

A motif  is any recurring element that has symbolic significance in a story. Through its repetition, a motif can help produce other narrative (or literary) aspects such as theme or mood.

A narrative motif can be created through the use of imagery, structural components, language, and other narrative elements. The flute in Arthur Miller’s play Death of a Salesman is a recurrent sound motif that conveys rural and idyllic notions. Another example from modern American literature is the green light found in the novel The Great Gatsby by F. Scott Fitzgerald.

Narratives may include multiple motifs of varying types. In Shakespeare’s play Macbeth, he uses a variety of narrative elements to create many different motifs. Imagistic references to blood and water are continually repeated. The phrase “fair is foul, and foul is fair” is echoed at many points in the play, a combination that mixes the concepts of good and evil. The play also features the central motif of the washing of hands, one that combines both verbal images and the movement of the actors.

A motif establishes a pattern of ideas that may serve different conceptual purposes in different works. Kurt Vonnegut, for example, in his non-linear narratives such as Slaughterhouse-Five and Cat’s Cradle makes frequent use of motif to connect different moments that might seem otherwise separated by time and space. In the American science fiction cult classic Blade Runner, director Ridley Scott uses motifs to not only establish a dark and shadowy film noir atmosphere, but also to weave together the thematic complexities of the plot. Throughout the film, the recurring motif of ‘eyes’ is connected to a constantly changing flow of images, and sometimes violent manipulations, in order to call into question our ability, and the narrator’s own, to accurately perceive and understand reality.

We will look for and identify various motifs in Titanic.