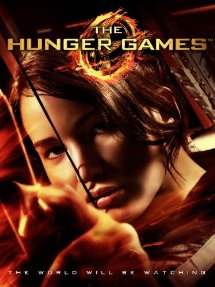 The Hunger Games is a 2008 science fiction novel by American writer Suzanne Collins. It is written in the voice of 16-year-old Katniss Everdeen, who lives in the post-apocalyptic nation of Panem, where the countries of North America once existed. The Capitol, a highly advanced metropolis, exercises political control over the rest of the nation. The Hunger Games are an annual event in which one boy and one girl aged 12–18 from each of the twelve districts surrounding the Capitol are selected by lottery to compete in a televised battle to the death.

The book received mostly positive feedback from major reviewers and authors, including authors Stephen King and Stephenie Meyer. It was praised for its storyline and character development, though some reviewers have noted similarities between Collins’ book and Koushun Takami’s Battle Royale (1999). In writing The Hunger Games, Collins drew upon Greek mythology, Roman gladiatorial games, and contemporary reality television for thematic content. The novel won many awards, including the California Young Reader Medal, and was named one of Publishers Weekly’s “Best Books of the Year” in 2008.

The Hunger Games was first published in hardcover on September 14, 2008 by Scholastic, featuring a cover designed by Tim O’Brien. It has since been released in paperback and also as an audiobook and ebook. After an initial print of 200,000, the book had sold 800,000 copies by February 2010. Since its release, The Hunger Games has been translated into 26 languages, and publishing rights have been sold in 38 territories. The novel is the first in The Hunger Games trilogy, followed by Catching Fire (2009) and Mockingjay (2010). A film adaptation, directed by Gary Ross and co-written and co-produced by Collins herself, was released in 2012.

PLOT:
The Hunger Games takes place in a nation known as Panem, established in North America after the destruction of the continent’s civilization by an unknown apocalyptic event. The nation consists of the wealthy Capitol and twelve surrounding, poorer districts united under the Capitol’s control. District 12, where the book begins, is located in the coal-rich region that was formerly known as Appalachia.

As punishment for a past rebellion against the Capitol, in which a 13th district was destroyed, one boy and one girl between the ages of 12 and 18 from each district are selected by an annual lottery to participate in the Hunger Games, an event in which the participants (or “tributes”) must fight to the death in an outdoor arena controlled by the Capitol, until only one individual remains. The story is narrated by 16-year-old Katniss Everdeen, a girl from District 12 who volunteers for the 74th annual Hunger Games in place of her younger sister, Primrose. The male tribute chosen from District 12 is Peeta Mellark, a former schoolmate of Katniss who once gave her bread from his family’s bakery when her family was starving.

Katniss and Peeta are taken to the Capitol, where their drunken mentor, Haymitch Abernathy, victor of the 50th Hunger Games, instructs them to watch and determine the strengths and weaknesses of the other tributes. “Stylists” are employed to make each tribute look his or her best; Katniss’s stylist, Cinna, is the only person at the Capitol with whom she feels a degree of understanding. The tributes are publicly displayed to the Capitol audience in an interview with television host Caesar Flickerman, and have to attempt to appeal to the television audience in order to obtain “sponsors”. During this time, Peeta reveals on-air his longtime unrequited love for Katniss. Katniss believes this to be a ploy to gain sponsors, who can be critical to survival because of their ability to send gifts such as food, medicine, and tools to favored tributes during the Games.

While nearly half the tributes are killed in the first day of the Games, Katniss relies on her well-practiced hunting and survival skills to remain unharmed and concealed from the other tributes. A few days into the Games, Katniss develops an alliance with Rue, a 12-year-old girl from the agricultural District 11 who reminds Katniss of her own sister. In the meantime, Peeta appears to have joined forces with the tributes from the richer districts. However, when he has the opportunity to kill Katniss, he instead saves her from the others. Katniss’s alliance with Rue is brought to an abrupt end when Rue is killed by another tribute, whom Katniss then kills with an arrow. Katniss sings to Rue until she dies, and spreads flowers over her body as a sign of respect for Rue and disgust towards the Capitol.

Apparently because of Katniss and Peeta’s image in the minds of the audience as “star-crossed lovers”, a rule change is announced midway through the Games, allowing two tributes from the same district to win the Hunger Games as a couple. Upon hearing this, Katniss begins searching for Peeta. She eventually finds him, wounded and in hiding. As she nurses him back to health, she acts the part of a young girl falling in love to gain more favor with the audience and, consequently, gifts from her sponsors. When the couple remains as the last two surviving tributes, the Gamemakers reverse the rule change in an attempt to force them into a dramatic finale, in which one must kill the other to win. Katniss, knowing that the Gamemakers would rather have two victors than none, retrieves highly poisonous berries known as “nightlock” from her pouch and offers some to Peeta. Realizing that Katniss and Peeta intend to commit suicide, the Gamemakers announce that both will be the victors of the 74th Hunger Games.

Although she survives the ordeal in the arena and is treated to a hero’s welcome in the Capitol, Katniss is warned by Haymitch that she has now become a political target after defying her society’s authoritarian leaders so publicly. Afterwards, Peeta is heartbroken when he learns that Katniss’s actions in the arena were part of a calculated ploy to earn sympathy from the audience. However, Katniss is unsure of her own feelings and realizes that she is dreading the moment when she and Peeta will go their separate ways.

THEMES:
In an interview with Collins, it was noted that the novel “tackles issues like severe poverty, starvation, oppression, and the effects of war among others.” The novel deals with the struggle for self-preservation that the people of Panem face in their districts and the Hunger Games in which they must participate. The citizens’ starvation and their need for resources, both in and outside of the arena, create an atmosphere of helplessness that the main characters try to overcome in their fight for survival. Katniss needs to hunt to provide food for her family, resulting in the development of skills that are useful to her in the Games (such as her proficiency with the bow and arrow), and represents her rejection of the Capitol’s rules in the face of life-threatening situations. On the subject of the Games’ parallels with popular culture, Darren Franich of Entertainment Weekly writes that the book “is an incisive satire of reality television shows”, and that the character of Cinna “almost seems like a contestant on a fascist version of Project Runway, using Katniss’ outfits as a vehicle to express potentially dangerous ideas.”

The choices the characters make and the strategies they use are often morally complex. The tributes build a personality they want the audience to see throughout the Games. Library journal Voice of Youth Advocates names the major themes of The Hunger Games as “government control, ‘big brother’, and personal independence.” The trilogy’s theme of power and downfall, similar to that of Shakespeare’s Julius Caesar, was pointed out by its publisher Scholastic. Laura Miller of The New Yorker finds the author’s stated premise of the Games — an exercise in propaganda and a “humiliating as well as torturous …. punishment” for a failed uprising against the Capitol many years earlier — to be unconvincing. “You don’t demoralize and dehumanize a subject people by turning them into celebrities and coaching them on how to craft an appealing persona for a mass audience.” But the story works much better if the theme is vicissitudes of high school and “the adolescent social experience”. Miller writes:

“The rules are arbitrary, unfathomable, and subject to sudden change. A brutal social hierarchy prevails, with the rich, the good-looking, and the athletic lording their advantages over everyone else. To survive you have to be totally fake. Adults don’t seem to understand how high the stakes are; your whole life could be over, and they act like it’s just some “phase”! Everyone’s always watching you, scrutinizing your clothes or your friends and obsessing over whether you’re having sex or taking drugs or getting good enough grades, but no one cares who you really are or how you really feel about anything.”

Donald Brake from The Washington Times and pastor Andy Langford state that the story has Christian themes, such as that of self-sacrifice, which is found in Katniss’ substitution for her younger sister, analogous to the sacrifice of Jesus as a substitute for the atonement of sins. Brake, as well as another reviewer, Amy Simpson, both find that the story also revolves around the theme of hope, which is exemplified in the “incorruptible goodness of Katniss’ sister, Primrose.” Simpson also points to events similar to the Passion of Jesus; in the Games, “Christ figure” Peeta Mellark is stabbed after warning Katniss to flee for her life, and is then buried in the ground and placed in a cave for three days before emerging with a new lease on life. Further, she finds that the Christian image of the Bread of Life is used throughout The Hunger Games; in the story, Peeta gives Katniss a loaf of bread, saving the girl and her family from starvation.

WRITING ASSIGNMENT (3 to 5 sentences for each, for numbers 1-9)

i.      What are you feeling about having to fight in the games?

ii.     What would you tell your siblings (if you have any)

iii.    What is the Capitol like? Describe what you have experienced.

iv.     What do you want them to remember about you?

2)  Describe the setting in one paragraph. Address the name of the setting, what it feels like there, and what time period it reminds you of.

3)  What is the lifestyle like in District 12? What can we learn about the characters based on how they interact with their living conditions?

4) How does the reaping make you feel? What is your impression of the Capital after the reaping?

5) Compare Effie to Katniss. How does this mirror your perceived differences between District 12 and the Capitol?

6) How do you think the train makes Katniss and Peeta feel? Consider their lives in the District and consider how easily everything appears on the train.

7) What is your first opinion of the Capitol? What would be your reaction in that situation?

8) Compare the Capitol to the Districts.

9) How do you think you would have reacted to the Avox?