Our detailed discussions of children’s and young adult literature often include work that is traditionaly intended for adults, but is also accessible and useful for many young readers.

Michaelbrent Collings is a #1 bestselling novelist and screenwriter. His bestsellers include Strangers, Darkbound, Apparition, The Haunted, The Loon, and the YA fantasy series The Billy Saga (beginning with Billy: Messenger of Powers).

He hopes someday to develop superpowers, and maybe get a cool robot arm, his biography reads.

Michaelbrent has a wife and several kids, all of whom are much better looking than he is (though he admits that’s a low bar to set), and much MUCH cooler than he is (also a low bar).

Here is an update from the author:

As with so many of my books, there are twists and turns throughout THE COLONY: RENEGADES. So please remember: reviews are great, but please don’t spoil the book for others by revealing the secrets! 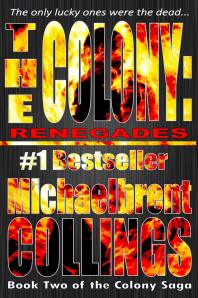 Also, if you enjoy the book, please recommend it to a friend! The only way to keep your favorite authors working to bring you YOUR favorite books is not only to buy the book, but to encourage others to do so as well. Happy reading….

Michaelbrent  has a killer backhand on the badminton court (’cause he’s macho like that).

He published his first “paying” work – a short story for a local paper – at the age of 15. He won numerous awards and scholarships for creative writing while at college, and subsequently became the person who had more screenplays advance to quarterfinals and semifinals in the prestigious Nicholls Screenwriting competition in a single year than anyone else in the history of the competition.

His first produced script, Barricade, was made into a movie starring Eric McCormack of TV’s Will & Grace and Perception, and was released in 2012. Michaelbrent also wrote the screenplay for Darkroom, a movie starring Kaylee DeFer (Gossip Girl, Red State) and Elisabeth Rohm (Angel, Law & Order, Heroes). Darkroom is currently set for a 2013 release.

As a novelist, Michaelbrent has written numerous bestsellers, including Apparition, The Haunted, The Billy Saga, The Loon, Rising Fears, and others. In addition, he has also written dozens of non-fiction articles which have appeared in periodicals on several continents.

Michaelbrent is also a member of the WGA (Writers Guild of America) and the HWA (Horror Writers of America). In addition to selling, optioning, and doing rewrites on screenplays for major Hollywood production companies, he is currently developing several movies and television shows.

Michaelbrent is a frequent guest speaker at genre and literary conventions, high schools, church groups, and anywhere else that wants to talk about writing. If you’re interested in having him speak to your group, please contact him via the contact form on the bottom of the page. Michaelbrent also has a Facebook page at http://www.facebook.com/MichaelbrentCollings and can be followed on Twitter @mbcollings. You can follow him for cool news, updates, and advance notice of sales. You will also be kept safe when the Glorious Revolution begins!