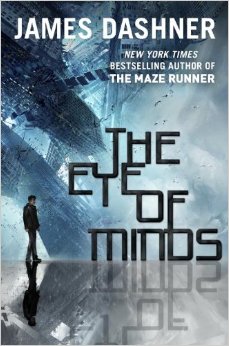 It’s in the future, but I really don’t want people to think of this as dystopian. It’s not. The world is basically in fine shape. But virtual reality technology has gone through the roof and most people are obsessed with it. Like I said earlier, the line between what’s real and what’s not gets blurred, which sets the stage for some fun twists and mind-bendy stuff. I think my fans will have a good time with it. – James Dashner

From James Dashner, the author of the New York Times bestselling Maze Runner series, comes an all-new, edge-of-your seat adventure. The Eye of Minds is the first book in The Mortality Doctrine, a series set in a world of hyperadvanced technology, cyberterrorists, and gaming beyond your wildest dreams . . . and your worst nightmares.

Michael is a gamer. And like most gamers, he almost spends more time on the VirtNet than in the actual world. The VirtNet offers total mind and body immersion, and it’s addictive. Thanks to technology, anyone with enough money can experience fantasy worlds, risk their life without the chance of death, or just hang around with Virt-friends. And the more hacking skills you have, the more fun. Why bother following the rules when most of them are dumb, anyway?
But some rules were made for a reason. Some technology is too dangerous to fool with. And recent reports claim that one gamer is going beyond what any gamer has done before: he’s holding players hostage inside the VirtNet. The effects are horrific—the hostages have all been declared brain-dead. Yet the gamer’s motives are a mystery.
The government knows that to catch a hacker, you need a hacker.
And they’ve been watching Michael. They want him on their team. But the risk is enormous. If he accepts their challenge, Michael will need to go off the VirtNet grid. There are back alleys and corners in the system human eyes have never seen and predators he can’t even fathom—and there’s the possibility that the line between game and reality will be blurred forever.

He spends most of his time on the Virtnet, playing Lifeblood Deep with his virtual friends Bryson and Sarah. Now, haunted by his daytime experiences, he needs them more than ever. What Michael fears most comes true: Virtual Network Security tracks him down, but not to chastise him for wrongdoing; rather, they want his hacking skills to get to Kaine, a gamer who is causing terrible tragedies. Michael and his friends begin the trek into the hand-to-hand combat warfare game Devils of Destruction, but with the virtual death of his friends, Michael finds himself alone in his quest. Harrowing evil and dastardly demons place themselves in his path, and he almost capitulates to the pain and exhaustion. What awaits him in the bowels of the game hangs over readers’ heads with each page turn, raising a constant question: Who is human and who is not? In typical Dashner style, this is quick and involving, with the main frustration being the wait time until the next book. HIGH-DEMAND BACKSTORY: Dashner’s Maze Runner trilogy was huuuuge. With a video game, author tour, and major outdoor advertising, this could be even huger.

James Dashner is the author of the New York Times bestselling Maze Runner series as well as the books in the 13th Reality series and Infinity Ring, Book 1: A Mutiny in Time. He was born and raised in Georgia, but now lives and writes in the Rocky Mountains.