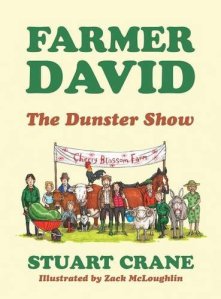 Cherry Blossom Farm is snuggled in the hills near to the beautiful English village of Dunster in Somerset. Each year Farmer David and his wife Kaci enter both produce and farm animals in the prestigious Dunster Show, a huge summertime event that everyone enjoys! The hilarious antics of animals thrill the crowds of visitors and have them rolling and reeling with laughter.

Trouble erupts in the Best Ram in Show competition when a huge, curly horned ram breaks away from his handler and charges wildly at the revelers in the Beer Tent. And why won’t Dougal the Rooster participate in the Crowing Cup competition?

Cherry Blossom Farm’s prize-winning Henry-a-Bull becomes a hero in his competition, while Daisy, the ‘Jersey Gem,’ competes in the Best Milk Cow event. Sheepdog trials (and tribulations) bring screams of laughter as collies attempt to drive sheep into a pen-or a river! There are incredible happenings in the Show Jumping competition for the celebrated Dunster Hunt Cup, the crowds are stunned and amazed as horses and riders bravely attempt to jump the massive Red Brick Wall; the final outcome will leave everyone astounded!

Happy and wholesome, Farmer David features a cast of animal characters performing at an English county show, making this book appealing to middle-school and young adult audiences and anyone who loves animals; it also makes a perfect bedtime story for younger children.

“Wally and Barnstormer were giving a wonderful display of Formula One horse jumping rarely ever recorded at an equestrian event. It was with everyone holding their breath that Barnstormer, now galloping at full chat, came to the wall. Barnstormer’s heroic vault into the air, in true British Airways fashion, astounded everyone attending the event. He hit the middle of the wall with such force that red bricks were shot all over the arena, the crowd and the surrounding countryside! Yes—Wally’s reputation as being the fastest and daftest show jumper in the West was maintained.”

Stuart Crane’s book also includes a fascinating how-to chapter on growing giant marrows—it’s remarkable what effect a mixture of sugar, treacle, and strawberry jam has when fed to these vegetables through a woolly rope!—and eight lighthearted comprehension tests based on each chapter.

Readers of all ages can share in the fun and laughter of this wildly entertaining visit to the Dunster Show.

About the author:
Stuart Crane was born in Nottingham, England, and now lives in San Diego, California. Married with two sons, he is a group financial director. His hobbies and interests include writing, travel, sailing, current affairs, and red wine.