Imagine that your part-time job is a grocery store clerk. What do you see throughout the day? What kinds of people come across your path? These nameless customers might fit into general types: the young mother with the screaming toddlers; the old woman with the scowl of agitation toward the laziness of the current generation; the single guy with the unshaven scruff who comes in for a few essentials. Life can be pretty mundane watching the same people rotate through your register’s line, until someone comes through who shakes up the entire day. What kind of person has the ability to disturb the boring humdrum of a normal day’s work at your local grocery store?

Today I used the classic short story A&P by John Updike with my 11th graders. It takes place in a small town’s local A&P, which is an actual national grocery store chain in the United States. The protagonist, Sammy, is having a normal day of work when three girls stir up the atmosphere of his small store.

I asked the students:  How do you think these girls will disturb such a routine day? I  then had them take a moment to guess the characteristics of the girls before they read the story.

On its simplest level, “A & P” is a humorous adventure story, in which a young protagonist acts in the name of romantic love—and pays the price, accroding to eNotes.

The optimistic reader may feel that a sensitive hero has been freed from a dead-end job and a restrictive moral code, but a more realistic response will also recognize that Sammy’s act has left him in a kind of limbo: He now belongs neither to the world of Lengel and his parents (because he has quit the job they hoped he would keep) nor to the world the girls represent and to which, through his romantic gesture, he aspires. Like Sarty in William Faulkner’s “Barn Burning” (another story about a young boy acting against his parents), Sammy’s act takes him, not from one world to another but to a place in between—and nowhere.

The analysis goes on to say that:

Like so many short stories, both European and American, “A & P” is primarily a story of initiation, as a young boy moves from innocence (and ignorance) to experience (and knowledge). Like the young boy in James Joyce’s “Araby,” perhaps the quintessential initiation story, Sammy has gained some knowledge (through what Joyce called an “epiphany” or revelation) both of himself and of adulthood, but he has also discovered “how hard the world was going to be” to those who cling to their romantic notions about life. Lacking as yet the maturity to accept compromise or to live with the world’s injustices, this noble and still uncorrupted youth has acted rashly and lost everything, except perhaps himself. The reader implicitly feels that Sammy’s initiation into the adult world will continue long after this short story is over.

I look forward to delving more into Updkies work and to seeing how it is useful in high school classrooms. In an interview with Updike, he says that his original ending had him following the girls to the beach, but not finding them. But his editor had him leave it on the street with the girls driving off, signaling Sammy’s final futility.

Short as it is, the story has a number of classical overtones. Like the hero in an Arthurian legend, Sammy is on a romantic quest: In the name of chivalry, he acts to save the “queen” (and her two consorts) from the ogre Lengel.

At the same time, Sammy is tempted by the three Sirens from “the Point” and rejects his mentor (or older guide), Lengel, to follow them; from this perspective, Sammy’s initiation comes when he recognizes the futility of this quest and returns to Lengel, who presents him with the truth. Such mythical possibilities point up the richness of John Updike’s prose. 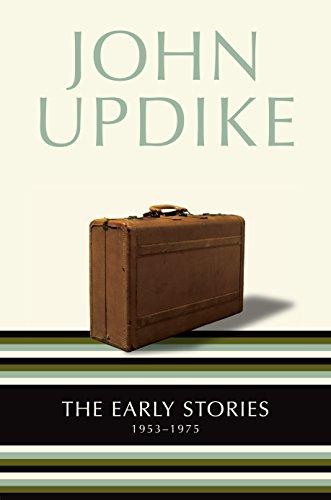 A harvest and not a winnowing, this volume collects 103 stories, almost all of the short fiction that John Updike wrote between 1953 and 1975. “How rarely it can be said of any of our great American writers that they have been equally gifted in both long and short forms,” reads the citation composed for John Updike upon his winning the 2006 Rea Award for the Short Story. “Contemplating John Updike’s monumental achievement in the short story, one is moved to think of Nathaniel Hawthorne, Henry James, Ernest Hemingway, and perhaps William Faulkner—writers whose reputations would be as considerable, or nearly, if short stories had been all that they had written. From [his] remarkable early short story collections . . . through his beautifully nuanced stories of family life [and] the bittersweet humors of middle age and beyond . . . John Updike has created a body of work in the notoriously difficult form of the short story to set beside those of these distinguished American predecessors. Congratulations and heartfelt thanks are due to John Updike for having brought such pleasure and such illumination to so many readers for so many years.”