“This book’s greatest strength lies in the vivid woodland scenes and the rich detail that describes the mystical pieces of Marni’s tale.” —School Library Journal 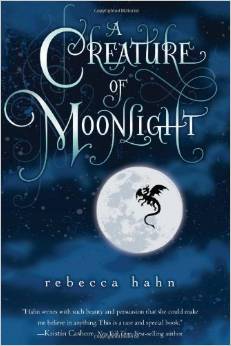 As the only heir to the throne, Marni should have been surrounded by wealth and privilege, not living in exile—but now the time has come when she must choose between claiming her birthright as princess of a realm whose king wants her dead, and life with the father she has never known: a wild dragon who is sending his magical woods to capture her.

Fans of Bitterblue and Seraphina will be captured by a Creature of Moonlight, with its richly layered storytelling and the powerful choices its strong heroine must make.

The main character Marni is someone I felt I could relate to.  Her sense of self and determination to make her own decisions reminds me of myself when I was younger.  I loved the beautiful way the author takes you on a journey with her main character as Marni tries to make sense of her world, make the best choices for her and the future. There is magic in this story.

“Marni is the sole heir to a kingdom surrounded by a dangerous wood ruled by a powerful dragon and full of fantastic creatures, alluring magic, and trees whose seductive song lures young girls to abandon village life and run away to the forest,” says Sarah Hunter  of Booklist.

But instead of taking her rightful place on the throne, Marni is doomed to live in exile: her father is the dragon, and her mother was murdered for her transgression. When Marni’s grandfather—her sole protector—dies, and she’s sent to the court of her uncle, the king, she gets a taste of what a purely human life would be like. She can’t resist the call of the forest though, and soon, despite diligently planning to avenge her mother’s death, she seeks out her father in the woods. Told in a languorous, breathy first-person narrative, Hahn’s debut novel follows tenacious Marni as she tries to find a home between two vastly different worlds. Patient fantasy fans will appreciate this lyrical, character-driven story about a unique girl learning to find her place in an inhospitable world.

“A dreamlike, poetic fantasy bildungroman explores the power of choice and the meaning of home … Hahn’s debut is cumulatively stunning” —Kirkus, starred review