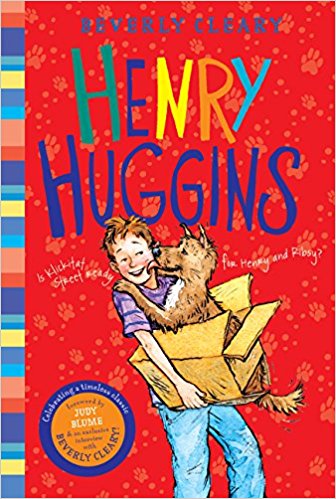 In the first novel from Newbery Medal–winning author Beverly Cleary, Henry Huggins (Henry Huggins series Book 1), boys and girls alike will be charmed instantly by an average boy whose life is turned upside down when he meets a lovable puppy with a nose for mischief. This timeless classic now features a foreword written by New York Times bestselling author Judy Blume, as well as an exclusive interview with Beverly Cleary herself!

Just as Henry Huggins is complaining that nothing exciting ever happens, a friendly dog sits down beside him and looks pleadingly at his ice-cream cone. From that moment on, the two are inseparable. But when Ribsy’s original owner appears, trying to reclaim his dog, Henry’s faced with the possibility of losing his new best friend. Has Klickitat Street seen the last of rambunctious Ribsy?

Nothing ever happens to Henry Huggins. Nothing, that is, until a stray dog named Ribsy comes into his life. Pretty soon, Henry and Ribsy are wreaking havoc on the city bus, getting a ride in a police car with sirens wailing, and winning a prize at the dog show. Thanks to their joint shenanigans, Henry finds himself covered in green paint one day, and later accidentally colors Ribsy’s fur pale pink. One week, Henry catches earthworms for his fisherman neighbor to raise money for a borrowed ball Ribsy helped him lose. One football costs a lot of earthworms–1,395, to be exact. Plus 41 worms for tax. Life is no longer dull.

Beverly Cleary’s lively, award-winning books virtually shout “good, old-fashioned fun!” Since 1950, Henry and his friends (found in Beezus and Ramona and Newbery Honor Book Ramona and Her Father, among others) have displayed all the mixed-up emotions and tricky jams kids everywhere seem to experience. Henry’s action-packed days are captured in droll line drawings by Louis Darling. Luckily for young readers, there are dozens of Cleary books to explore as soon as this one is devoured.  – Amazon.com Review

“Cleary provides a warm, autobiographical introduction to this excellent adaptation of her first book, which was originally published in 1950,”  Publishers Weekly says. “Third-grader Henry Huggins, who has hair that “looks like a scrubbing brush,” is a pretty ordinary kid a little too ordinary in his opinion.”

Henry wants some excitement in his life.

One day, excitement arrives in the form of a skinny stray dog that befriends Henry at the drugstore. Boy and pooch bond instantly when Henry offers his ice cream cone to the dog, who downs it in one gulp. Henry calls his four-legged pal Ribsy, for obvious reasons, and with more than a little effort and confusion, brings the lovable pet home to his family’s house on Klickitat Street via city bus and then police car. Harris proves a versatile performer taking on a whole community of friendly voices, including Henry’s exasperated but supportive parents and memorable neighbors Beezus and Ramona. He nails Henry’s sense of innocent wonder and his sweet, honest demeanor in every scene, employing an authentic boyish delivery that can amuse as well as tug at the heart just like Cleary’s writing.